LGBTQ+ Healthcare: Contending with a Spectrum of Needs, Challenges, and Supports

A Conversation with Jack DeChellis, Senior Director of Research Operations at Beaumont Health

Most people would agree that today's healthcare system can be complex, if not impossible, to navigate without more than a few hiccups. But what happens when your personal identity—whether it's your gender, sexual orientation, or race—prevents you from receiving holistic healthcare? Many lesbian, gay, bisexual, transgender, queer, and other LGBTQ+ patients have come forward with stories of inadequacies in the healthcare system, from billing snafus to outright prejudice. It’s a problem that doesn’t seem to get the attention that it deserves.

We sat down with Giacomo “Jack” DeChellis of Beaumont Health to ask him about his experience with the healthcare system as an administrative employee, as the founder of a thriving and innovative LGBTQ+ employee resource group, as a former activist with the Human Rights Campaign (HRC), and as an aging gay man. His perspective and personal experience focuses the spotlight on how health systems' struggles with communication and a lack of modern, consistent physician training are impacting quality of care.

Let's start with something easy. Tell us about your background and current role as it stands today.

My undergrad was in accounting, and I earned an MBA in Finance and International Business. I worked at Deloitte & Touche for many years before I came to Beaumont Health on the financial arm. I was there less than a year when the individual who oversaw the research institute asked me to come work with her. While I admitted that I knew nothing about the world of research, she said it was okay and believed that I would learn everything I needed to. So, that's how I ended up here, which was almost 20 years ago. At Beaumont, I manage the whole realm of research operations, finance, accounting, sponsored programs administration, grants and contracts development and administration, the physical space for our bench activities and clinical trial offices—all the business operations of research.

I also always had a passion for social justice issues, especially marriage equality. We had worked a really long time trying to get the Elliott-Larsen Civil Rights Act in the state of Michigan to include sexual orientation and gender identity—it still does not—because it's still legal to discriminate against gay people, theoretically, in Michigan. So, that got me involved many years ago as the Michigan membership chair with HRC. You know the Beaumont booth at Pride? I was the person that had to set up the HRC tent, go to every Pride [event] in the state, and get people to join and contribute to HRC. I did that for a couple of years and, during that time, we got more people to join in Michigan than in New York and California. The executive director of HRC at the time, Elizabeth Birch, came out to Michigan to see what I was doing, and she said, "What? You're doing shows?" So, I was asked to chair the HRC dinner, a black-tie event, where Michigan’s governor at the time would attend.

I was also involved as a board member with the Forum Foundation, which grants scholarships to LGBT students in Michigan. I then became involved with Marianne Williamson’s (a Democratic presidential primary candidate) Rainbow Unity group when she came to Detroit to lead the Church of Today. I was doing a lot of social justice work as well. So that's my background, I guess!

Can you describe Beaumont's LGBTQ+ employee resource group and how it came about?

I’m pleased that the BHSH System has hired a new chief inclusion, equity, diversity, and sustainability officer who will be starting at the end of June 2022. There was a diversity leader at Beaumont a few years back who began initiating employee resource groups; she was looking to establish an LGBTQ+ group and asked me to chair it. I found two co-chairs, and we created a purpose—a mission statement—and one aspect was to create initiatives to address concerns from our community of LGBTQ+ patients, their families, and our employees.

The first project we handled came from requests from the community for physician and provider referrals. LGBTQ+ individuals are sometimes fearful when seeking new providers because they don't know how they're going to be received. People assume providers are always open minded and accepting of LGBTQ+ people, but—based on what we were hearing—that was not always their experience. The modern version of the Hippocratic oath mentions providers being members of a unique society with special obligations to all fellow human beings; however, individuals do not exist without flaws. They sometimes have tendencies to hold both inherent biases and prejudices. Some people have had bad experiences, which is why they were asking if we have provider referral lists so that they can go and tell the doctor who they are and not be uncomfortable.

And were you able to make these connections?

We put together a questionnaire and sent it out, seeking providers that could ensure an LGBTQ+-friendly, culturally sensitive environment at their practices and asking if they'd be willing to be listed in a document provided to the LGBTQ+ community at Pride events. Initially, we had about 100 physicians, and it grew to well over 200. The physician referral line also uses this list to direct callers to LGBTQ+-friendly endocrinologists, pediatricians, and other doctors.

Then, as Epic, our medical records system, began to release updates to sexual orientation and gender identity (SOGI), we created educational modules for the system, developing three distinct SOGI courses—one for the clinical Epic user, one for the nonclinical Epic user, and another for the non-Epic user. This effort aimed to familiarize providers with information—the proper nomenclature, pronouns, and language to use [with LGBTQ+ patients]—and how to capture that information properly in the medical record. We still have work to do in this area, specifically regarding consistency as to the when, where, and by whom this information will be queried and captured, especially due to the sensitive nature and the need for privacy during these conversations. But, in my opinion, it always should be. The answers to these questions can directly impact patient care, accurate diagnosis, and treatment.

It seems like you dive right into the challenges and experiences you discover in your work. How do you come up with these mold-breaking approaches?

Absolutely. I think about where we can get the most bang with our limited resources. Recently, we decided to work on the HRC Healthcare Equality Index (HEI). There are 60 different items in the HRC’s HEI that they recommend you achieve, and a lot of progress is being made because, ultimately, it's going to improve how [Beaumont does] business. It recommends useful updates to certain policies and processes.

And the providers list? I think it's progress to want to move forward from where we began (seeking assurance that providers affirm that they provide an LGBTQ+-friendly environment). Developments continue to be made in this area, and information and practices change, so we need to ensure that those environments are moving along with them. We may need to consider periodic completion of an educational module as a requirement of remaining on the list. A simple example is language; terms that may have been considered appropriate a few years ago may no longer be, and they may have been replaced by something more inclusive. Ultimately, I want to ensure that we're not sending people to places that aren’t offering the optimal inclusive experience.

So how has your own identity impacted your role in a healthcare organization?

For example, I have been going to my primary care physician as an out gay man for 20 years. During office visits, I realized we never discussed vaccines that I may benefit from as a gay man; we also did not talk about PrEP therapy. In my most recent visit, I took the opportunity to discuss these matters with my physician and utilized it as an educational experience.

Generally speaking, being gay got me more involved. It got me asking what I believe are relevant questions and wanting to initiate discussion in my own organization. Sometimes I’m amused when I’m initiating certain questions like these involving clinical care, as I'm an accountant! I'm a CPA, who also happens to be gay. But this is my experience, and I want to ensure our providers are aware of my concerns and the community’s concerns and are considering these aspects of care when engaging with our community.

What does the future of healthcare look like for this population? Are there generational differences to consider?

Well, in my case and many others, we don't have children of our own to be our patient advocates or caregivers. [So, we'll rely on] nursing homes and assisted living, and there will be people in my generation and others who aren't as accepting of people in the LGBTQ+ community. They may be hostile toward us, which is very scary for LGBTQ+ elders. Can they be themselves? Can they out themselves in these care and living settings? Will they be ostracized in the community they're living in? I don't want to have to go back in the closet as an old person to get proper healthcare. I want to feel safe living in an assisted-living or nursing home. I don’t want to go back to the experiences I had in grade, middle, and high school, where those charged with providing a safe environment didn’t or sometimes actively encouraged the opposite.

Access to affirming healthcare isn't always standard. And with the urban/rural mix in Michigan—where people don't always live near places where they have a better chance of receiving inclusive care—how can technology help make that safer and more accessible?

Well, we talked about the Epic SOGI modules, ensuring everything is asked at the proper intake point so the system reflects who a person is. If that isn't in the system, how can you possibly provide the best care? If you don't know I'm a gay man, that may affect your ability to form an accurate diagnosis. If you're not capturing that data in the electronic medical record system, and these systems aren’t talking to each other (different hospitals, health systems, private practices), it can cause problems. As I mentioned earlier, even discussion regarding the where, when, and who will ask these questions can raise difficult issues for a site. How can we ensure that we are always getting them into the system correctly and providing a safe, private environment where patients can share information comfortably and understand why it is being asked and documented?

In your opinion, what should the medical innovation community be doing right now to advance a more inclusive healthcare system?

A global database. There are people worried that Big Brother is coming after us, and I understand parts of that fear. It's legitimate. People might feel fearful to disclose that they're LGBTQ+ in any system, because who knows what's going to come after you? In a perfect world, one would hope that we could have these global systems where, if you get care in Italy, if you get care here, you can pull up everything that person has been through when they come in. 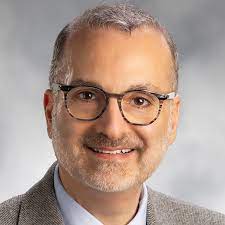